The Teosto Prize goes to the works of Yona, Linda Fredriksson, Cecilia Damström and Eevil Stöö

The 2022 Teosto Prize is awarded to four works of music. The total value of the prize is the highest ever – EUR 60,000 – and it will be divided equally among the winning works.

The 12 nominees and four winners of this year’s Teosto Prize were exceptionally selected from Finnish works of music published or premiered in 2020–21, i.e. over two years.

The winners of the Teosto Prize were chosen by a four-member jury consisting of the 2020 Teosto Prize winners, artist Jesse Markin and composer and producer Totte Rautiainen, as well as members invited by Teosto’s management team, Rector of the University of the Arts Helsinki Kaarlo Hildén and journalist Maria Veitola.

“This year’s nominees and winners represent many different genres, which is a wonderful thing.  It shows how diverse and expressive the music offered by the Finnish music industry currently is,” says Totte Rautiainen, Chair of the jury.

The winners were announced at an event for invited guests at the restaurant of Helsinki Music Centre on 19 May.

Rationale behind the winner selection

Uni johon herään is an especially atmospheric work that has required a strong vision, boldness and creative madness from its authors.  The powerful story is conveyed to the listener through exceptionally confessional and naked lyrics. Yona’s sensitivity, soulfulness, passion and artistry blossom in unprecedented ways with the Tapiola Sinfonietta symphony orchestra: both communicate and intertwine with each other in a phenomenal way. The end result is a breathtakingly powerful and cinematic whole.

The intense Juniper takes it listeners to the heart of what it means to be human. The compositions on Linda Fredriksson’s debut album are delicately lingering, personal and tentative, distancing themselves from jazz and most of the genre’s typical features in an original way. Playing the saxophone is traditionally a masculine pursuit, but on Juniper Fredriksson deconstructs everything she has learnt and approaches the instrument and the genre of jazz with a clean slate and through her own persona. The compositions flow naturally in a sensitive, fragile and inquisitive way, while skilfully maintaining coherence as the soundscape and spaces change from piece to piece.

ICE creates cinematic, powerful and threatening images that flow as the orchestra’s strong expressions convey the events with the certainty of a force of nature. The symphony orchestra’s various instrument groups form large and uniform masses of sound that churn and hiss until fading into the skyward sounds of a harp. Even though the work is a strong statement on climate change and forms a whole with an ice sculpture designed by the architect Erkko Aarti, the composition can also stand on its own as a powerful work of music.

Eevil Stöö and team have managed to create a unique universe that avoids uptightness and where extremes can meet easily. The work moves along in a relaxed and easy-going way, offering joy and many bursts of laughter to the listener.  The album shows what the Finnish language is capable of while the warm-hearted compositions and backing gently leave room for exceptional wordsmithing. The lyrics along with their references offer lots to look into for many listens, providing as rich an experience to both those familiar with the hip-hop tradition and ordinary listeners.

In addition to the winners, the nominees included:

The Teosto Prize is awarded to bold, original and innovative works of music

The purpose of the Teosto Prize is to annually recognise bold, original and innovative works of music or collections of works. With the prize, Teosto also wants to support the diversity of genres and increase appreciation for the work of music authors in society.  Awarded since 2003, the Teosto Prize is one of the most noteworthy art prizes in the Nordic countries. It is now being awarded for the 17th time.

Following a rule change, the prize was awarded to 2–4 works or collections of works this year (normally it would be awarded to 1–4 works). The works may represent any genre.

Further information and requests for interviews

Sending interview requests to the winners after the announcement of winners 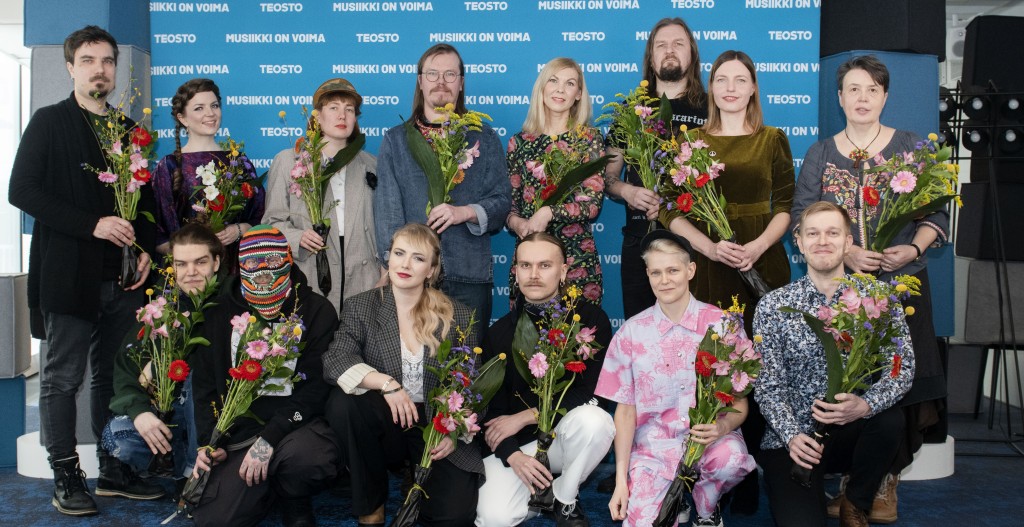