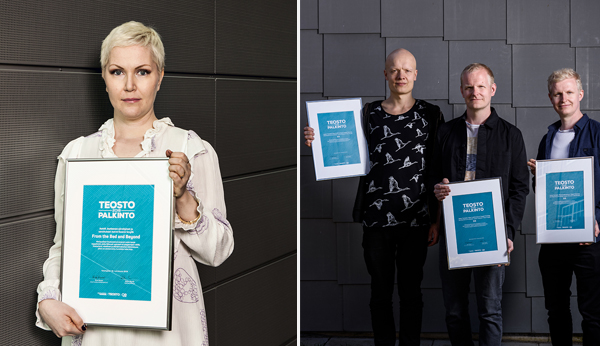 The Teosto Prize for 2018 was awarded to Astrid Joutseno for her compositions, lyrics and arrangement on Astrid Swan’s album From the Bed and Beyond and to Joona Toivanen, Tapani Toivanen and Olavi Louhivuori for their compositions and arrangements on the trio’s album titled XX. Awarded for the 15th time, the Teosto Prize is one of the most noteworthy art prizes in the Nordic countries. When there are two winners, the amount of the prize is EUR 20,000 for each winner.

The winning works were selected by a three-member jury, from a shortlist of five candidates that was chosen by a preliminary selection panel. The jury was chaired by MEP Miapetra Kumpula-Natri. Her fellow jury members were Juhani Merimaa, the CEO of the notorious rock club Tavastia, and Mikko Joensuu, who was awarded the Teosto Prize last year for works on his albums Amen 1 and 2.

“The pre-selection panel gave us a shortlist that was very versatile and compiled of works that were very different from each other. It made our work rather challenging. However, after many intensive rounds of listening and discussing the candidates thoroughly, our decision became evident,” says Kumpula-Natri, chairperson of the jury.

The judges characterise the winning works as follows:

From The Bed And Beyond
“Diverse modes of expression open up new layers to the pieces that move fluently from one pop genre to another. A touching and honest compilation that is full of life and entails the whole range of human emotion.”

XX
“Progressing in small steps, the composition is a joyful and smooth lyrical journey. The music weaves in a controlled and minimalistic way as well as forms a mature and harmonic whole.”

This year, the professional pre-selection panel had selected five works or pieces as nominees for the Teosto Prize. In addition to the aforementioned winners, the other candidates were (in alphabetical order of the title of the work):

Over 100 candidates and 27 winners of the Teosto Prize

“The Teosto Prize was founded 15 years ago to promote bold, unique and innovative music in Finland. Including this year, there has been altogether 109 works or work entities as candidates for the prize, out of which 27 have been announced as the winners. These works demonstrate what a lively and diverse musical culture Finland has,” says Kim Kuusi, chairman of the board at Teosto.

The maximum amount of the prize is 40,000 euros. It has been funded by music authors and publishers and it is awarded to 1–4 musical works or work entities each year.  If the prize is awarded for a sole musical work or piece, the prize is worth 25,000 euros. The works may represent any genre, but they must be produced after the previous award season. The prize was first awarded in 2003.