EUR 51.6 million distributed to music authors and publishers in 2016 by Teosto

“Our goal is to be an efficient and reliable partner for music authors, ensuring that they are compensated for the use of their music. Last year was successful for us: the amount of music use royalties collected by us increased by EUR 6.4 million year on year and royalties paid to Finnish music authors grew by 17 per cent,” Teosto’s CEO Katri Sipilä says, summarising 2016.

Radio and TV the most significant sources of income

Royalties paid to Finnish music authors and publishers for music performed abroad amounted to EUR 3.8 million. This is an increase of 27 per cent from the previous year. One of the factors behind this growth was the 150th jubilee of Jean Sibelius, which was celebrated with his music around the world. 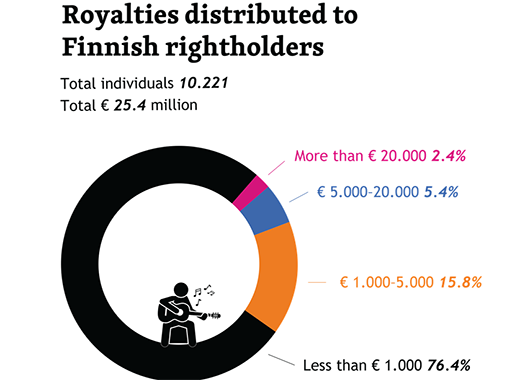 Total copyright royalties paid to music authors and publishers through Teosto in 2016 were EUR 70.6 million. The amount includes royalties collected by Teosto and other copyright organisations as well as compensations for private copying paid to Teosto members. Teosto’s cost percentage in 2016 was 14.9.