EUR 53.6 million distributed to music authors and publishers in 2017 by Teosto 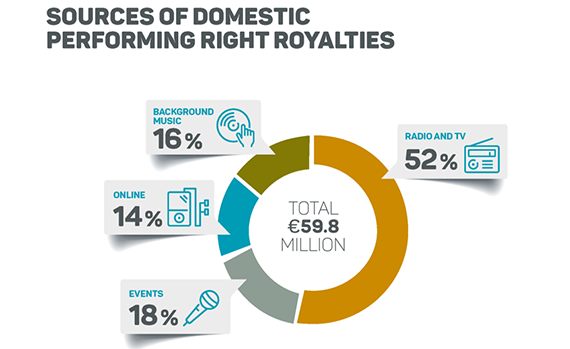 In 2017, Teosto collected EUR 59.8 million in royalties for music use in Finland. This growth was mostly based on online services.

“Music consumption in digital services continues to grow rapidly. Our goal is to ensure that while consumption increases, the royalties received by music authors and publishers grow at the same rate. In 2017, the amount of royalties paid to Teosto’s customers increased by as much as 15 per cent”, remarks Kim Kuusi, the Chairman of the Board of Director of Teosto, summarising the situation.

Teosto collected a total of EUR 8.2 million in online royalties. The increase in royalties is largely due to music services such as Spotify, and to video on demand services, such as Netflix and HBO.

Radio and TV the most significant sources of income

Despite the growth of online services, radio and TV continue to be the most important sources of income to music authors and publishers. Last year, 52% of the royalties collected by Teosto came from music played on the radio and TV.

Approximately 18% of the royalties collected by Teosto in 2017 originated in events, concerts and festivals. The royalties gathered from such events are a substantial source of income to Teosto’s Finnish customers in particular, as Finnish festivals and events are heavily dependent on Finnish artists and music.

According to foreign royalties paid by Teosto, Finnish music is most frequently played abroad in Germany and Sweden. In 2017, the amount of royalties paid to Finland increased also in Spain and Belgium. Remuneration from abroad amounted to EUR 3.0 million.

Total copyright royalties paid to music authors and publishers through Teosto in 2017 were EUR 67.7 million. The amount includes royalties collected by Teosto and other copyright organisations as well as compensations for private copying and for a loan. Teosto’s cost percentage in 2017 was 14.8.

Changes to the Board

On 18 April, Teosto’s General Spring Meeting elected Kimmo Hakola, a representative of serious music, Saara Konttinen, a music publisher, and Jussi Chydeniuks, a music author, as members of the board. Markus Nordenstreng and Ari Nieminen terminated their term in the Board.

Kim Kuusi, Chairman of the Board and a composer, Kaija Kärkinen, lyricist, and Tommi Tuomainen, music publisher, will continue on the board until the Spring General Meeting of 2019.