Eur 56.3 million distributed to music authors and publishers in 2018 by Teosto

“In 2018, we celebrated Teosto’s 90 years of operations and also had our eyes firmly on the future.  Financially, the year was a good one overall for Teosto’s rightholders. Teosto’s revenue exceeded €70 million for the second time during the association’s history”, summarizes Risto Salminen, the CEO of Teosto.

Teosto collected a total of EUR 8.9 million in online royalties. The increase in royalties is largely due to video on demand services such as Netflix and HBO.

Radio and tv the most significant sources of income

Despite the growth of online services, radio and TV continue to be the most important sources of income to music authors and publishers. Last year, 52% of the royalties collected by Teosto came from music played on the radio and TV. 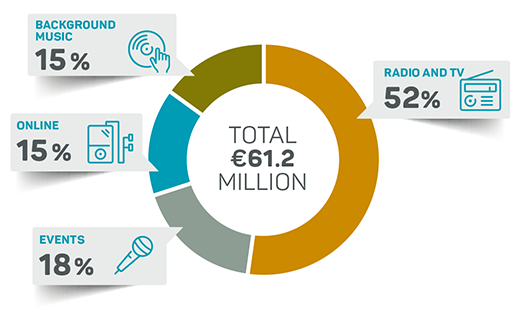 Approximately 18% of the royalties collected by Teosto in 2018 originated in events, concerts and festivals. The royalties gathered from such events are a substantial source of income to Teosto’s Finnish customers in particular, as Finnish festivals and events are heavily dependent on Finnish artists and music.

According to foreign royalties paid by Teosto, Finnish music is most frequently played abroad in Germany and Sweden. Remuneration from abroad amounted to EUR 3.8 million.

Total copyright royalties paid to music authors and publishers through Teosto were EUR 70.1 million. The amount includes royalties collected by Teosto and other copyright organisations as well as compensations for private copying and for a loan. Teosto’s cost percentage in 2018 was 17.4.