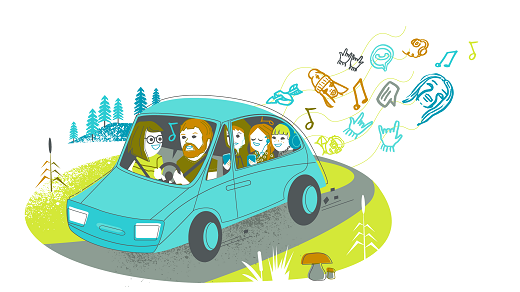 Finns’ music listening habits digitalised swiftly in the late 2010s. Spotify and phones became the devices and channels the entire nation uses to listen to music, the focus of listening to music switched from albums to playlists and individual songs. Finnish chart pop and rap climbed the charts, and the popularity of live music reached unprecedented heights in 2019.

These are some of the conclusions from the extensive survey by Teosto and IFPI Finland on Finns’ music listening habits. The results of the survey were released today at the Music & Media event in Tampere. Conducted for the fourth time, the survey charted the current situation but also the future trends of the 2020s. Presentation of the survey results (pdf)

The music consumption of Finns changed fundamentally in the 2010s

In the early 2010s, the role of the smartphone as a music listening device was not significant but the situation has changed rapidly: at the end of the decade, already three million Finns listen to music on their phone on a weekly basis.

The focus of listening to music switched from albums to playlists and individual songs.

A Finn started using on average six digital/social media services every week, and digital channels became the most important way for new artists to be discovered. However, the radio still plays a key role in spreading awareness of artists in more extensive age groups after the initial breakthrough.

The sales of physical phonograms decreased rapidly throughout the decade until recent years when the sales of vinyl records took a surprising upturn for true fans and collectors of music. This increases confidence in the future of specialty record stores.

Radio is suitable for easy listening of background music, and it maintained its position in the 2010s as a listening device: almost every Finn still has two or three favourite radio stations that they listen to at least occasionally.

When it comes to genres, the decade as a whole was a jubilee of chart pop with popular favourites like Sanni and Antti Tuisku. The union of rap and chart pop became mainstream, and JVG and Cheek are popular in all age groups. In addition, EDM added its flavour to the field of pop in the 2010s. Juha Tapio became a giant of schlager and Haloo Helsinki! a giant of Finnish rock, Lauri Tähkä established his permanent status among the most popular Finnish artists switching from one genre to the other.

Rock and metal stepped aside from the mainstream spotlight to their own genres of dedicated hardcore fans. According to a survey for music listeners aged 10–12, rock is strongly in the offside.

Live favourites of a million Finns and beloved lyrics

The popularity of live music increased, and in 2019, a record-breaking two thirds of Finns have been to a concert. There are around ten artists that a million Finns say they have seen live at least once. These include Eppu Normaali, Apulanta, Jari Sillanpää, Kaija Koo, Haloo Helsinki!, Jenni Vartiainen and Antti Tuisku. Of the live performers who have reached an audience of a million Finns, the most beloved are Cheek, Lauri Tähkä, JVG, Sanni and Juha Tapio.

The number one of all Finnish live performers is Popeda as almost 1.5 million Finns have seen the band live in a gig or in a concert during their career.

The lyrics that have most spoken to Finns are distributed evenly over the past five decades. Younger music listeners value catchy slogans and inventive expressions. The favourite lyrics of a more adult audience discuss life and often include imaginative insights on relationships. Cheery feelings or longing sorrow are more often the topics of songs rather than societal issues or humour punched with jokes.

The music phenomena of year 2019 raised in the survey responses include the Queen film Bohemian Rhapsody (450,000 viewers) that broke viewer records also in Finland and the band Ville Valo & Agents that broke album sales records in the modern time of streaming.

Forecast: how will music listening change in the 2020s?

So far, each decade has shook the music world in its own way, and the same development will be repeated in the 2020s, too. The union of virtual reality and music will grow stronger the further into the 2020s we advance. The new services arising from this area will reach and establish a status currently held by YouTube, Facebook, Netflix and Spotify.

One or more new music genres will break through to the mainstream in the next decade. The next great wave of music will come from Asia. We will also see a counter-attack of music relying on traditional instruments: it is unlikely that Ed Sheeran will remain a unique phenomenon in his more acoustic expression.

Even if new favourites for all age groups are marketed to the public through teen-aged audience entering to the 2020s, the high consumption of digital channels among more mature age groups enables strong targeted marketing of new artists to them, too.

Stereotypical snapshot of music listening in 2019: The Korhonen family’s trip to the summer cottage

The Korhonen family is driving on the narrow road leading to their summer cottage north of Joensuu. The mother of the family, Mirva, feels emotional when she hears Lauri Tähkä’s song Palavaa vettä on the radio. In the backseat, the children have drowned out the sounds of the outside world with their headphones, and even ten-year-old Luka because his mum won’t change the station to Loop.

On Spotify, Luka is listening to BTS, and Aliisa, who is two years older, is listening to Cledos. In addition to reading WhatsApp messages, sixteen-year-old Aleksi is interested in the original Led Zeppelin vinyl records that are waiting for him at the cottage. Grandpa promised that Aleksi can take them home with him.

The father of the family, Matti, is still thinking about the Rammstein concert last weekend where Aleksi convinced him to go. Matti has also been to see Cheek and JVG’s gigs with the younger kids, and there’s nothing wrong with that – they put on quite a show!

When shopping for groceries at the supermarket, the family bought the Ville Valo & Agents CD as a gift for Grandma – otherwise she’ll probably play the favourite albums of her youth again, as she usually does.

Just as they are arriving, Aliisa sees a video made by her classmate to a Billie Eilish song on TikTok and it’s getting a lot of likes. Wow – that’s cool.

Teosto and IFPI Finland carried out the annual survey to research changes in Finns’ music listening habits now for the fourth time. In the data collection of year 2019, Norstat collected extensive data from their consumer panel of a thousand Finns aged 13–75 in mid-August 2019. In addition, a separate survey was carried out for more than a hundred 10–12-year-olds, and seven Finnish record dealers were interviewed in person.

Presentation of the survey results (pdf)

*Favourite lyrics of the Finns, credits