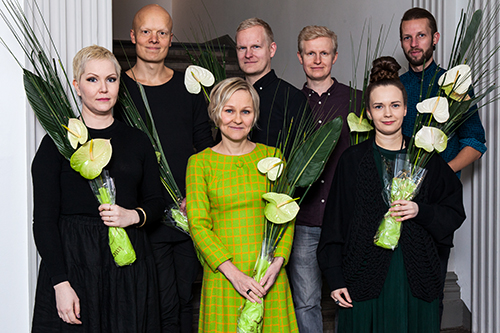 All the nominated works and collections of works were published or premiered in 2017.

The Teosto Prize nominees and grounds for their selection (in alphabetical order according to the name of the work):

Swan’s album has the ability to turn the private into something universal, and it rises above its dark subject matter by viewing it with a surprising, approachable light-heartedness, both in terms of composition and lyrics. The album is given its bright silver lining by melodies and arrangements that confidently draw from a large pool of popular music genres. A touching, delicate and strong work of art.

Metsänpeitto expands our comprehension of the temporal dimensions of music and the violin’s adaptability. Little by little, the album leads its listener into another, different kind of world. The music is at times threatening, and tender at others, like the forest. Luoto’s innovative approach to tradition has resulted in a bold, and sometimes even intimidating, album that bows down to no one. The work of a composer with a strong voice of her own.

Strong melodies and improvisational expression take turns in a curious way, giving the impression that anything could happen. Hyväluoma’s melodious hooks and luscious harmonies coupled with his expert choral successions offer a constant string of revelations. Although the compositions draw strongly from the traditions of jazz and popular music, layers of Finnish and Nordic folk music are also present. A brisk and bold crossover!

A playful, humoristic and downright fun piece that employs the full range of sound produced by a large orchestra and a choir. Wennäkoski’s rich, lyrical touch is apparent. Uniin asti is a piece de resistance by a mature artist, giving recognition to the Finnish male choir tradition while boldly looking into its future.

XX is a bold, meditative whole built out of sparse elements, taking its listener into a completely different world. The lyrically minimalistic and rhythmically delicate trio allow their listeners plenty of space to be enchanted by the experience. Small droplets of sound swell into a babbling brook, which, after having flown for a while breaks down again, only to take on a different musical course.

Music authors and publishers reward bold, original and innovative Finnish music annually with the Teosto Prize. This year, the prize is awarded for the 15th time.

The prize will be awarded to one to four musical works or pieces, and the maximum prize is EUR 40,000. If the prize is awarded for a sole musical work or piece, the prize is EUR 25,000. The works may represent any genre, but they must be produced after the previous award season.

The preliminary selection panel and jury

The winner(s) of the prize is selected out of the nominees by a jury, comprising MEP Miapetra Kumpula-Natri (jury chairman), CEO of Tavastia Juhani Merimaa and last year’s Teosto Prize winning composer-writer Mikko Joensuu (Amen 1 & 2).

The winner of the Teosto Prize will be announced at an event held at the Helsinki Music Centre restaurant on 26 April.