Music Listening in Finland 2022: under-30s are the most interested in chart hits and new artists, the most popular artists are surprisingly similar across all age groups 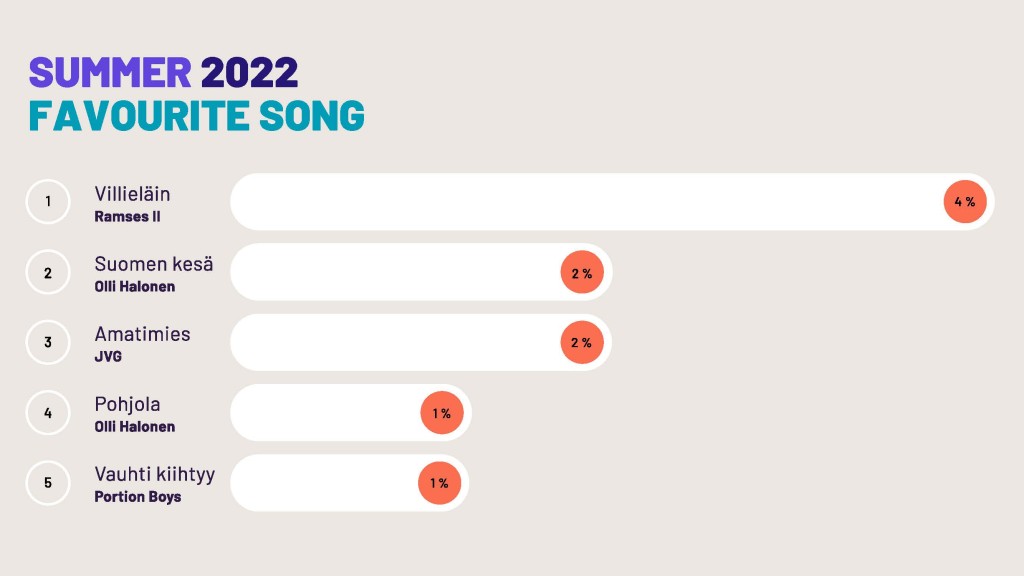 Teosto and IFPI Finland’s Music Listening in Finland 2022 survey was carried out through Norstat’s consumer panel in August 2022. More than one thousand 13–75-year-olds, of whom most were aged 13–18, responded to the survey.

Those interested in chart music are mostly young adults: if you want to know what people are really thinking in Finland, listen to the lyrics of the latest hit songs

Quick and easy chart pop is the most listened to kind of music on the radio and music streaming services. This year, chart pop also surpassed rock in popularity when it comes to live music. When asked in the survey about what the chart music of today sounds like to them, Finns aged under 30 gave responses that were very different from those of older respondents. Young adults had a positive and carefree attitude towards chart music, whereas a significant share of middle-aged respondents had a negative attitude towards most chart music and those over 60 felt very distant from it.

In the survey, the most often mentioned favourite hit songs of summer 2022 were Ramses II’s Villieläin, Olli Pohjola’s Suomen kesä and JVG’s Amatimies. Kari Tervonen, Omnicom Media Group’s Roadmap Director, thinks that Finns should keep track of the lyrics and themes of hit songs to get a better understanding of what people in Finland are thinking at any given time.

“The most popular hit songs are often based on a clever lyrical hook. This summer’s biggest hits clearly express the emotional undercurrents of society. A good example of this is Olli Pohjola’s Suomen kesä, which emphasises Finnishness in times of hardship as Finns were seeking safety from each other during a security threat.  Villieläin, on the other hand, hits a sore point of life in the West, i.e. a lack of control over one’s own life and conforming to other people’s expectations. This was underlined by the COVID-19 pandemic.”

People aged 13–25 are the most favourable target group for new artists: being known as a person not just through hit songs is valuable for artists

After a break of three years, the Music Listening in Finland 2022 survey included questions about respondents’ awareness and enjoyment of new Finnish artists that had emerged over the past three years. Respondents aged 13–25 were the most familiar with new artists that had just entered the market. Yeboyah, Pihlaja and Pehmoaino are examples of artists that are already known by more than half of under-25s, but whose breakthrough with older age groups is yet to come. Bess, who used the Eurovision Song Contest as a fast track, is the new artist who has increased her popularity the fastest this year, followed by Viivi and Olli Halonen.

“As most Finns listen to songs more than artists, even a big hit will not guarantee a major breakthrough in spontaneous awareness among large demographic groups. Being known for other things is also valuable for artists,” Tervonen says.

Finns’ music taste: the same megastars are the most popular in all age groups

Even though awareness of new artists mostly spreads among 13–25-year-olds, the all-time favourite Finnish artists are remarkably similar across age groups. Kari Tervonen states that, outside of the biggest stars, more and more people recognise hit songs without knowing the artist.

The survey asked for spontaneously mentioned favourite artists by music genre. For Finnish-language music, Antti Tuisku and Behm got the most mentions in chart pop, JVG and Elastinen got the most in hip hop, Apulanta and Popeda in rock and Juha Tapio and Kaija Koo in schlager.  For English-language music, Ed Sheeran and Adele were the most popular in pop, Eminem and 50 Cent in hip hop, Queen, Elvis and AC/DC in rock and Metallica and Rammstein in metal and hard rock.

“Nowadays, artists have a smaller role, and, in a world that focuses more on individual songs, the biggest personalities stand out even more. Perhaps this is why Finns’ favourite artists in different genres are so similar from teenagers to the over-50s. Only music listeners who were born in the 1950s or earlier had a strong tendency to name favourite artists that indicated nostalgia for their youth. When it comes to music genres, rock is more attached to the past than schlager, though the popularity of Blind Channel among younger people is an exception to this.”

Teosto and IFPI Finland’s Music Listening in Finland 2022 survey provided information about changes in Finns’ music listening habits over the longer term for the ninth time. The researcher was Kari Tervonen, Omnicom Media Group’s Roadmap Director, supported by Susanna Perämaa from Teosto and Tommi Kyyrä from IFPI Finland. The results of the survey were presented at the Music x Media event for professionals in Tampere on 30 September 2022.