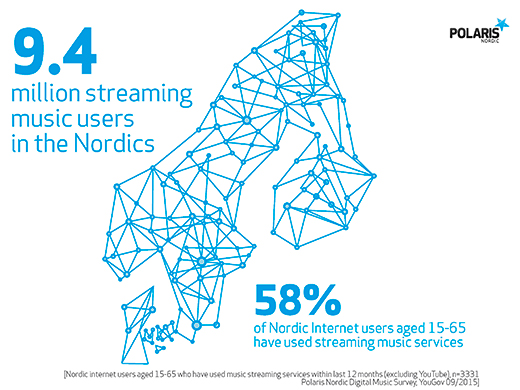 Streaming services are a big hit

Alltogether 58% of Nordic respondents aged 15 to 65 (an estimated 9.4 million) say they have consumed music content within the previous twelve months from one or more music streaming services, such as Spotify, Apple Music, Tidal/Wimp or TDC/YouSeePlay.  Looking at all online music sources, Spotify, YouTube and Apple iTunes are the top three music destinations for Nordic consumers.

Consumers are willing to pay for digital music

The survey shows that a steady number of Nordic Internet consumers also pay for their online use of music. In 2015 a total of 23% of respondents aged 15 to 65 stated they had paid for their digital use of music within the last year (e.g. as downloads or via streaming services).

64% of all respondents also agree or strongly agree that music creators should be paid when their music is played on online services.

The Polaris Nordic Digital Music survey was carried out in Denmark, Norway, Finland and Sweden in September 2015. The survey, which was was conducted by YouGov, was targeted at Internet users aged 12 to 65 and attracted a total of 3,200 online respondents (800 per country). The survey was commissioned by the three Nordic collecting societies Koda (Denmark), TEOSTO (Finland) and Tono (Norway), who formed the Polaris Nordic Alliance in 2013. The survey is the second of its kind; the first was carried out in 2014.

For more information or to set up an interview, please contact: