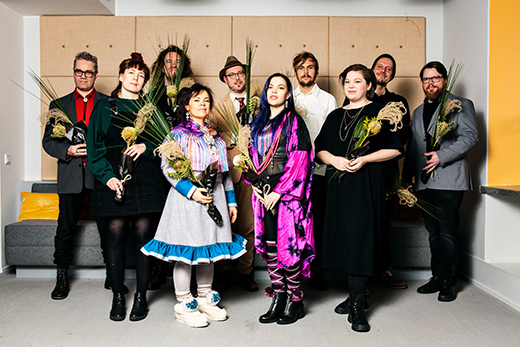 All the nominated works and collections of works were published or premiered in 2018.

“The Teosto Prize preliminary selection panel is an excellent vantage point in the state of music being published in different forms in Finland. Participating in the panel for two years has been an enlightening experience,” states Arttu Tolonen, the chairman of the preliminary selection panel, a musician and a music reporter. “The creative musical power of Finns is in full bloom regardless of genre, and each year seems to have its own personality. This year the strongest areas seemed to be art music and original interpretations of pop music. Choosing the nominees was again difficult this year, but we believe that we can provide the jury in charge of choosing the winner with an extremely rewarding task,” Tolonen adds.

The Teosto Prize nominees and grounds for their selection

In alphabetical order according to the name of the work:

With their compositions and arrangements, Koistinen and Rehn have created an exceptionally powerful and unique world for Color Dolor. The album is an interesting package that consists of both astonishingly brilliant, in places even shameless, pop songs and minimalistic works that resemble a soundscape rather than traditional singing.

Solju’s album is dazzlingly beautiful and dramatic pop music, simultaneously local and global. Its roots are in the traditions of the Saami people, but it breaks new ground into the world. The album is named accordingly: New times!

In his work, Hilli paints an astonishingly accurate picture of our time – turbocharged, faster than its own voice and prone to bloating with too much information – that grates on our power of observation. The composition skillfully dances on the edge of chaos, absorbing energy and inspiration from it.

On her album, Litku Klemetti presents herself as a skillful composer with phenomenal talent in carrying meandering melodic patterns. The lyrics support the package by telling sinuous stories of everyday things which, as the plot progresses, end up forming a great adventure.

Tuomas Palonen’s album, oozing with mystique, is a masterful mixture of Finnish folk music and Anglo-American folk tradition, tied to both history and present, tradition and the character of its creator.

Freeman’s impressive choral work bites into one of our ethnic pain points, using beauty as a weapon. The harmonious and profound work invites us to calm down and offers consolation for the moments when we are face to face with transience.

On his new album, the sharp-eyed lyrist succeeds in turning personal into public. And political. Vihapuheita ja rakkauslauluja talks about our world in a timeless way that stands up to listening for decades.

Composers, lyricists and music publishers who are Teosto’s clients reward bold, original and innovative Finnish music annually with the Teosto Prize. This year, the prize is being awarded for the 16th time.

The prize will be awarded to one to four musical works or pieces, and the maximum prize is EUR 40,000. If the prize is awarded for a sole musical work or piece, the prize is EUR 25,000. The works may represent any genre, but they must be produced after the previous award season.

The preliminary selection panel and jury

The winner(s) of the prize is selected out of the nominees by a four-member jury, comprising last year’s Teosto Prize winners Astrid Swan and Joona Toivanen, as well as professor Tuija Hakkila-Helasvuo (The Sibelius Academy) and Music Director Jussi Mäntysaari (Nelonen Media’s radio) as members invited by the Teosto management group.  The winner of the Teosto Prize will be announced at an event held at the Helsinki Music Centre restaurant on 25 April.

More information and requests for interviews