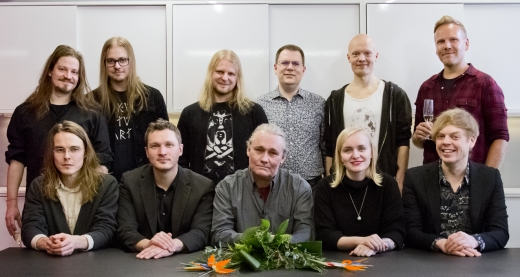 ”The nominees represent a variety of music genres and styles, which wonderfully demonstrates the diversity of music that is made and published in Finland over the course of one year,” says music journalist Susanna Vainiola, vice-chair of the pre-selection jury that selected the nominated works.

”What is special about the selection process for the Teosto Prize is that the different genres of music are, from the very beginning, on an equal footing. Members of the pre-selection jury must break out of their comfort zones in terms of their taste in music and face their own prejudices, which makes the work extremely interesting and eye-opening. I’m sure every one of us on the jury found exciting new music during the listening process,” continues Vainiola.

All the nominated works and collections of works were published or premiered in 2016.

The Teosto Prize nominees and why they were chosen

The works are in alphabetical order according to the name of the work:

Agartha – Oddarrang
Compositions by Lasse Lindgren, Olavi Louhivuori and Osmo Ikonen and arrangements by Oddarrang on the album Agartha.
A work which ignores the boundaries of genre and makes its own rules, weaving all its threads into a harmonious tapestry. A breathing, hypnotic entity, like a living organism.

Amen 1 and Amen 2 – Mikko Joensuu
Compositions, lyrics and arrangements by Mikko Joensuu on albums Amen 1 and Amen 2.
Mikko Joensuu invites the listener to his own, personal journey. He utilises the techniques of both roots music and contemporary electronic music to create something new. The Amen works progress from one piece to the next and the instrumentation lives as a natural part of it all.

Autioilla rannoilla – Edu Kettunen
Compositions, lyrics and arrangements by Edu Kettunen on the album Autioilla rannoilla.
A masterpiece from a true craftsman of music whose songs encapsulate the confidence brought about by a long career. The subtly expressed, grand stories take the listener on a journey around the world. The lyrics fit seamlessly into the music.

Romer’s Gap – Olli Virtaperko
Concerto for an electrically-amplified cello and orchestra by Olli Virtaperko.
A concerto pure and consistent in style, stretching the dynamics to their limits. The work flows naturally between heavy distortion and symphonic beauty. The composition by Virtaperko allows the amplified cello to growl like a large animal.

Värähtelijä – Oranssi Pazuzu
Lyrics by Toni ”Ontto” Hietamäki and compositions and arrangements by Oranssi Pazuzu on the album Värähtelijä.
Värähtelijä builds itself around black metal but expands the palette with a determined and open mind. The intense journey breathes in long arcs without the sense of rush.

Music authors and publishers reward courageous, original and innovative Finnish music annually with the Teosto Prize. This year, the prize is awarded for the 14th time.

The prize will be awarded to one to four musical works or pieces, and the maximum prize is EUR 40,000. If the prize is awarded for a sole musical work or piece, the prize is EUR 25,000. The works can represent any genre, but they must be produced after the previous award season.

A four-person jury will select the winner or winners of the award from the group of nominees. Members of the jury are Senior Advisor Leena Puntila (chair), CEO of Flow Festival Suvi Kallio and last years Teosto Prize winners, composer Antti Auvinen (chamber opera Autuus) and lyricist, rapper Henri ’Paperi T’ Pulkkinen (Paperi T: Malarian pelko). The decision will be announced at the event held at the Helsinki Music Centre restaurant on 20 April.