Teosto Prize for 2015: Mikko Hassinen receives the prize for his album Elektro GT 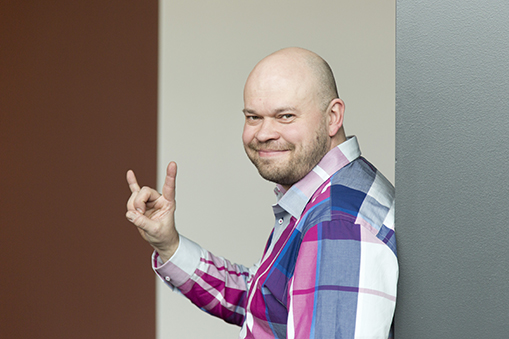 A bold and unapologetic work that captures its audience – The Teosto Prize was awarded for the twelfth time this year, and the winner is Mikko Hassinen for his works on the album Elektro GT. The prize sum is EUR 25,000.

The winner of the Teosto Prize was announced on April 9 at Musiikkitalo in Helsinki.

According to the jury, Mikko Hassinen’s album is characterised by the urge to do things and express one’s self. The works have variety and the album is rich with musical ideas which allow the virtuoso players to use their skills. Elektro GT is a bold and unapologetic work that captures its audience.

The winner was selected among the nominees by the award jury that had three members; Päivi Kärkkäinen, General Director of the Finnish National Opera, Stefan Möller, Managing Director at RadioMedia and Risto Ylihärsilä, the winner of last year’s Teosto Prize.

Päivi Kärkkäinen, the chair of the jury, described the task as rewarding.

“Our decision was unanimous. We wanted to emphasise the award criteria of the Teosto Prize: courageousness, originality and innovation.”

For Hassinen, becoming a nominee was a win on its own.

“Previous nominees and award-winners include many artists who have inspired me, and becoming one of them has thus far been one of the high points of my career,” Hassinen said.

“When I was making this album, I employed a number of thought games or ‘plays’ which I hoped would help me shed the worst clichés of electro-jazz. It is very difficult to achieve an original sound or to make music in a fully unique way, but I set out to make an album that would sound fresh and even novel, at least to my own ears.”

This year, the music professionals in the pre-selection jury had selected six works or pieces in the finale. The nominees were:

The authors and publishers of music use the Teosto Prize to reward courageous, original and innovative Finnish music. This year, the prize was issued for the 12th time.

The prize will be awarded to 1–4 musical works or pieces, and the maximum prize sum is EUR 40,000. If the prize is awarded for a sole musical work or piece, the sum is EUR 25,000. The works can represent any genre, but they must be produced after the previous award season.