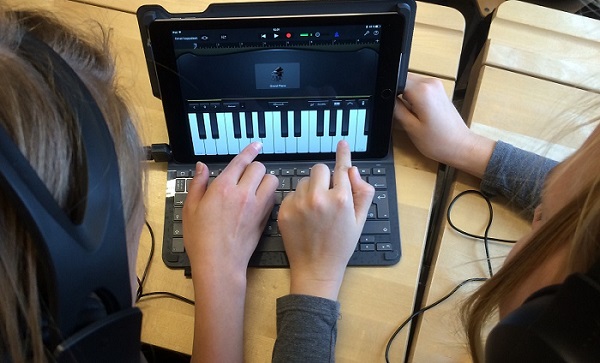 Future Songwriting is a European project led by Finnish copyright society Teosto. With the help of EU funding, the Future Songwriting project will introduce, pilot and validate Into School music education concept, developed in Finland, to Finnish, German and French schools.

In the concept, pupils compose, write and produce their own songs with the help of digital tools. The aim of the concept is to bring creative music-making in the core of music education in schools and encourage teachers and students to focus on creativity, instead of the culture of practicing to play music created by other people.

“Our goal is to give an impulse for the long-term development of music education in schools and to support bringing up the next generation of music creators. For the last couple of years, we’ve been piloting Into School music education concept in Finnish schools with convincing results. However, the challenges of music education are similar also in other parts of Europe. We see this as a great opportunity to share our knowledge and experiences outside the borders of Finland and get valuable input from high-level partners with the help of European funding”, commented Risto Salminen, acting CEO of Teosto.

The 2-year project is expected to be launched in October 2018 with a total budget of 840,000 EUR. Future Songwriting is the first EU project coordinated by Teosto.

Want to know more? Get in touch!