Some songs, like a good friend invite themselves onto the blank page and make themselves right at home while other songs, like a force of evil, have to be wrestled to the paper in a bitter war. Berkleemusic Ambassador and songwriting coach James Linderman looks at how the fight for better chord structures can lead to a peaceful treaty in the land of better songs.

I believe that we all have some etherial forces working with us and for us when we write songs, especially the songs that appear to come out of nowhere, fully formed.

It also often seems that we have elements working against us when we write and although we can do little to influence the ”other worldly” aspects of songwriting we can certainly manage many of the tangible elements and get them to work for us and not against us. Turning our songwriting enemies into creative allies.

In the military there is a saying that states ”a good plan will survive contact with the enemy”. By this, we can therefore assume that a bad plan (or a lack of planning) may not withstand enemy fire. We may fall to an enemy that cannot be predicted and also has a stake in the result of our battle. Our enemy also has an influence on our resolve, as well as on the outcome.

It then makes sense that a good Plan A should be built with a contingency. Every great Plan A should have a very good Plan B and perhaps even a Plan C, D, and E that have some merit as well. The only way to be completely confident in your plan A is to make it compete with other worthy plans and win it’s alpha letter, fair and square.

Here is one way this applies to songwriting.

If we take a small simple piece of melody and harmonize it with stock chords we will often be quite satisfied with the first combination that works and is not discordant. This, to me, is an unchallenged Plan A without a back up reserve of options.

How many great melody and chord combinations do not, therefore, get discovered, not because we cannot find ones that work right away, but because we can. By finding a useable set of notes and chords we consider that job to be done and start to look at the next songwriting obstacles. Next we have to craft a worthy lyric, record a brilliant demo, pitch that wicked demo, work up a sweet live version with a super pithy opening monologue, script our Grammy acceptance speech, and on and on and on…

On the other hand, we also don’t want to find ourselves on an endless search for a better, and even better melodic/harmonic marriage and never move forward with our work. At Plan X, Y or Z I think it is fair to say that this pursuit can no longer be called songwriting and is just an exercise in limitless reharmonization, like ”…this is the song that never ends” for chord choices. At some point a song has to be formed from a system of reasonably final choices.

Let’s see if we can put a Plan A and B into practice.

Here is a simple piece of melody (written in notation and in guitar tablature) that we can now create a set of harmonic options for. 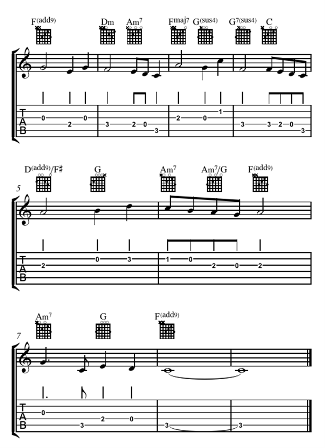 This second example would work nicely as my Plan B but sounds more like a Plan A that I never would have found if I had approached writing this from a perspective of ”first idea/ best idea”.

I now challenge you to send me a Plan C, D, E, etc. for this little slice of melody as a collective pledge to see music differently and face the enemy of under harmonized melodies with some sharper weapons.

James Linderman teaches guitar and piano and coaches songwriting over Skype to students all over the world from his studio in Newmarket, Ontario. Canada. James is an Ambassador to The Berklee School of Music’s online school and represents Berklee at music events and conferences. You can reach James at jlinderman@berkleemusic.com. or visit www.theharmonyhouse.ca