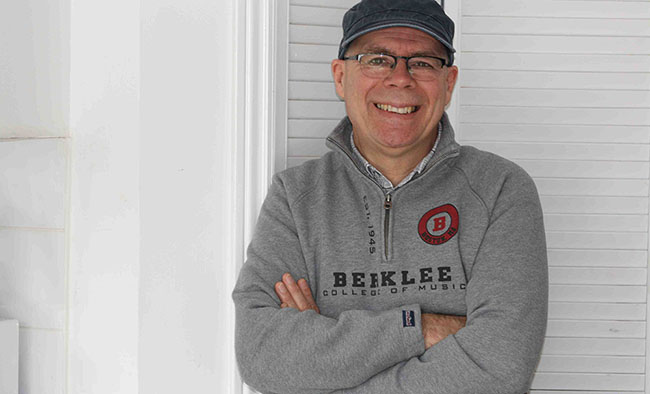 How did you come up with the idea of the songwriters workbook?

The workbook idea started with me learning the concept of chord functions at York University here in Toronto. It was something that academic musicians understood and used but pop songwriters generally did not know about.

I was looking for a way to help students write better formed songs. My aim was to deliver a concept to them without them having to take 7 years of academic study. Since I was both an academic music student and a recreational songwriter I was kind of in the perfect place to see this from both sides.

It took me 10 years to properly research, compile and finish the book. I also hired a very talented designer Andrew Henstra whose design ideas made the book easy to use and super handsome. This book eradicates writers block and allows songwriters to get to the creative part of the writing process right away.

Is your own background in classical music, pop or in some other genre?

My background is as diverse as my current collection of teaching positions. I started out with classical piano lessons and Hawaiian guitar lessons when I was really young. My parents were very supportive but I was not a brilliant student. It took me a long time to figure it all out. My mom was in real estate and my dad was a car salesman so I was not exactly born into it.

I switched to a regular electric guitar when The Beatles arrived in North America and my new goal was to join that band as both Paul McCartney and George Harrison…That obviously did not happen, but by that time I had my own ideas of what I was going to do.

I added jazz guitar, classical guitar, bass guitar and composition studies in University and became interested in composition as an academic pursuit and songwriting as a central recreational interest.

Along the way I became obsessed with music theory and I eventually studied film composition specifically.

Becoming a songwriter – do you view the career as a journey or a destination?

I missed the memo that said that you have to specialize to be successful and I just never settled into a single narrow discipline.

Perhaps my greatest strength is my diversity of interests and diversity of skills. They bring a lot of nuance, perspective and collateral learning opportunities to my work as a songwriter, composer and teacher.

I encourage students to outwork everyone around them because there will always be someone smarter and more naturally talented…In the story about the tortoise and the hare, it is ok to be the tortoise because the rabbit does not actually win out in that story.

I inspire students with the notion that slow and steady wins the race and to shut out the distractions and do good work. Being a good musician is actually manual labour but it is wonderful work.

There is a current trend for a lot of composers, especially in film composition, to believe that it is an art form in transition since so much can be done with a computer and a recording program like Live, Logic, Reason or Pro Tools, etc. But I feel like it is still very valuable to study music formally to be able to truly compete.

Many would say that being proficient at reading notation is an outdated skill but there are still a lot of composing work that requires that skill and notation is still the fastest vehicle driving ideas from composers to musicians who need to play them.

Especially if the musician is younger, and wants to build a sustainable career, I believe reading notation on the piano (and on your main instrument as well) is a very powerful skill to take with you on the journey.

Having an elite skill on your instrument is a great feature to bring to your work as well.

Why there are so few female composers? Do you think the situation is changing?

Historically, music was encouraged as a pastime for women but as an artistic pursuit for men and that parallels a lot of other disciplines that took a long time to provide gender equality… way too long in my opinion.

We have some brilliant composers now that also happen to be women and I feel like it is our responsibility to offer every option to female students to help continue to balance this out.

Music should be a meritocracy but a lot of merit is built with the influence of instruction. I make sure I teach students of every gender the exact same way, with the exact same materials, and with the same expectations and objectives.

Why aren’t there any modern composers who can match Mozart or Sibelius? Is there any point comparing them with our contemporary musicians?

The classical era was like the jazz era or the classic rock era, etc. It produced a collection of musical works that now completely defines it but in no way should that be the end of the story for any of those styles.

Where we start as a culture, is never where we finish and most songwriters and composers are now making music that stands on the shoulders of the groundwork that the pioneers of those styles, provided.

If you prefer traditional classical music, then Mozart and Beethoven and Bach are great choices but modern composers such as John Williams, Ennio Morricone, James Newton Howard, Leonard Bernstein and Steve Reich should also be considered for moving the art form into, and compatible with contemporary culture.

The same is true with songwriting as I do not think that even Bob Dylan would feel like we should have just stopped at Blowing in the Wind.

About your work book: How many years of music theory studies one should have? Is it a printed book or pdf?

“Song Forms for Songwriters” is for all songwriters so it delivers this idea of chord functions, which is an academic convention, to non-academics as well as academic music creators alike.

The book has actually been quite popular with anti-academic songwriters since it delivers this way of looking at songs in a completely intuitive and organic process but just with a lot more information to work with.

The workbook is only available in printed form. The “book and Skype session” packages offer some extra inside tips on how to make the most of using the book to write songs. This also gives me a chance to meet a lot of the songwriters using the book which has been a tremendous experience.